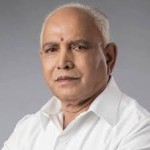 
About
Bio
Bookanakere Siddalingappa Yeddyurappa (born 27 February 1943) is an Indian politician who serves as the Leader of the Opposition in the Karnataka Legislative Assembly since May 2018. He has served three times as Chief Minister of Karnataka and is the BJP state president. In 2008, Yeddyurappa became the Chief Minister after leading the BJP to a victory in the Karnataka Assembly elections, a first for the BJP in a South Indian state.[6] In 2011, Owing to alleged ill-treatment meted out to Yeddyurappa by the BJP High Command, he left BJP and formed his own party, the Karnataka Janata Paksha. However, in 2014 he merged his party with the BJP and was subsequently elected to the 16th Lok Sabha from the Shimoga constituency, which he quit after being elected to the Karnataka Legislative Assembly in May 2018. On 17 May 2018, he was sworn in as the Chief Minister of Karnataka, his third term in the office. Unable to get a majority support in the Assembly, he resigned just two days after taking office. He is popularly known as "Raitha Bandhu" for his pro-farmer policies, initiatives like separate agriculture budget in Karnataka Government during his chief ministership.
About
Role: Leader of the Opposition in the Karnataka Legislative Assembly
Lives in: Bangalore
Born on: February 27, 1943
Rating

Would you recommend Yeddyurappa B. S.?